Culinary teams from Fiddlesticks CC and Sycamore Hills GC faced off in a cutting-edge competition that embodied the depth of skill and connection within the club industry. 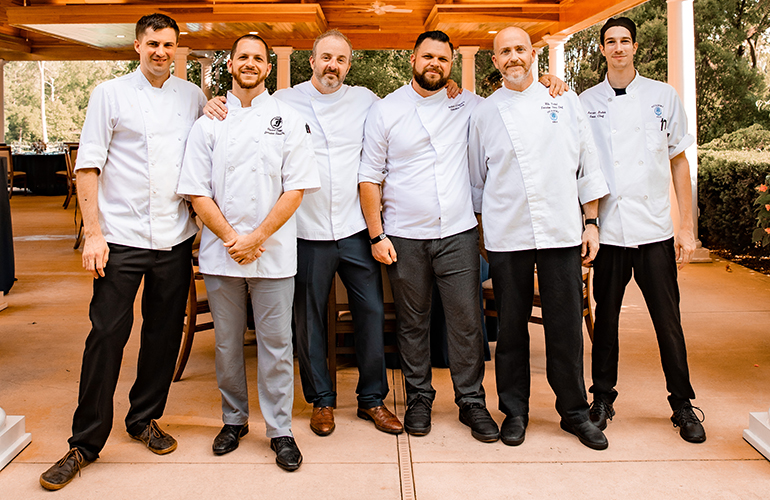 The best events in the club business are built around connections that can make them stand out for both members and staff. And as Chris Hampton, General Manager/Chief Operating Officer of Sycamore Hills Golf Club in Fort Wayne, Ind., began to think about new culinary events to put on his club’s schedule for 2021, he remembered some special connections that got his mind racing about how to go beyond the usual formats for dinners that feature guest chefs or regional/international cuisine.

“We had hired Anthony Capua as our new Executive Chef the year before, and the impact he has made has been tremendous,” Hampton explains. “Anthony had previously been Executive Sous Chef at Fiddlesticks Country Club in Fort Myers, Fla., working for Executive Chef Ryan Daniels. And while he was at Fiddlesticks, his brother Vincent worked for him as a sous chef, and then took his position as Executive Sous after Anthony left to come here.”

“Hmmm,” Hampton thought as he mulled over all of those connections, which had actually occurred to him during his first interview with Capua a year earlier. “What if we brought the team from Fiddlesticks here for a wine-dinner showdown? We could build it up as mentor vs. mentee, brother vs. brother—even ‘Fort vs. Fort.’ “

It took some time to work out the logistics and details, but on August 4th, 40 members of Sycamore Hills gathered excitedly to not only partake, but be key participants, in the inaugural “Battle of the Chefs,” where they would be served dishes made by each team for five courses, from an amuse bouche through dessert. The menus for the $150/person event, which sold out almost as soon as it was announced, included full descriptions of each dish (along with wines that were served to complement each course). But the menus, which did not reveal which club’s team had made which dish, also served as a “ballot” that the guests were asked to use, to vote for their favorite choice for each stage of the meal.

And while what was involved with “considering” those votes was enjoyable from start to finish, making the final choices was something that really put every diner to the test—or actually to the taste.

The parameters for what each team prepared were kept simple, with no restrictions on the creativity that could be employed for both the amuse bouche and dessert stages, and only stipulations that the three courses in between should use shellfish, duck and red meat as their proteins.

The Fiddlesticks team arrived three days in advance of the event and was housed in Sycamore Hills’ on-site cottages. But they didn’t spend much time there, as they immediately began intensive planning and preparation in the Sycamore Hills kitchen, using designated space that was hidden from view of how the Sycamore Hills team was also gearing up simultaneously for the Battle.

“To have that much culinary firepower in one kitchen was truly an abundance of riches,” Hampton says. “And what was most impressive was that both teams worked in a shared space as if they had been working together for years.”

After the results of all that work were served for each course during the Battle by the Sycamore Hills staff (through equally impressive synchronized service), the completed ballots were collected and everyone eagerly awaited the announcement of the results. (Another impressive achievement that should be noted is that the Sycamore Hills food-and-beverage staff also prepared and served 70 a la carte meals from the club’s single kitchen on the same night the Battle was being waged.)

Not surprisingly, the Battle didn’t result in a runaway for either team, with the winners for each course all being decided by razor-thin vote margins. Fiddlesticks took the overall crown by taking Courses 3 and 4 along with the amuse bouche, while Sycamore Hills won Course 2 and dessert.

But in the end, all were winners among the diners, culinarians and staff who were part of the initial Battle. “It came down to the wire, and sure, I would have liked to not have Fiddlesticks edge us out, but doing this event was so much more than a win or loss,” says Anthony Capua. “A chance to cook once again with my mentor, brother, other great chefs and my co-workers was nothing short of spectacular.

“It was a chance for two great teams to work together to put on what was a culinary show all night,” Capua adds. “It’s hard to explain how special this event was, not only for our team, but also for me personally. To put on a groundbreaking event and to have some fantastic feedback from our membership just put it over the top.”

And unlike what Apollo Creed said to Rocky after their first battle, Ryan Daniels, as the head of the winning team, would be happy to entertain a rematch.

“I enjoyed this much more than the usual culinary competition or guest-chef event,” he said after the results had been announced. “It was fun and not ego-driven, and it was the perfect setting in terms of the number of people and courses, although maybe in the future the portion sizes could be reduced a bit.” (A sentiment that many of the attendees who felt the need to taste and re-taste, before being able to finally decide how to cast their votes, might agree with.)

“I’m a super-proud ‘parent’ when I see how far Anthony has come,” Daniels added about his former Executive Sous. “Sycamore Hills is very lucky to have him, and I would welcome having a ‘Round Two.’ “ Talk of making that happen, according to Hampton, is already underway. “This may be the first time an event like this may have happened at a club, but I can promise you it won’t be the last,” he says. “And who knows—Sycamore Hills might become a trendsetter, and you will see events like this pop up at private clubs around the country.” Behind the Plate: Shoreacres’ Tropical Mousse