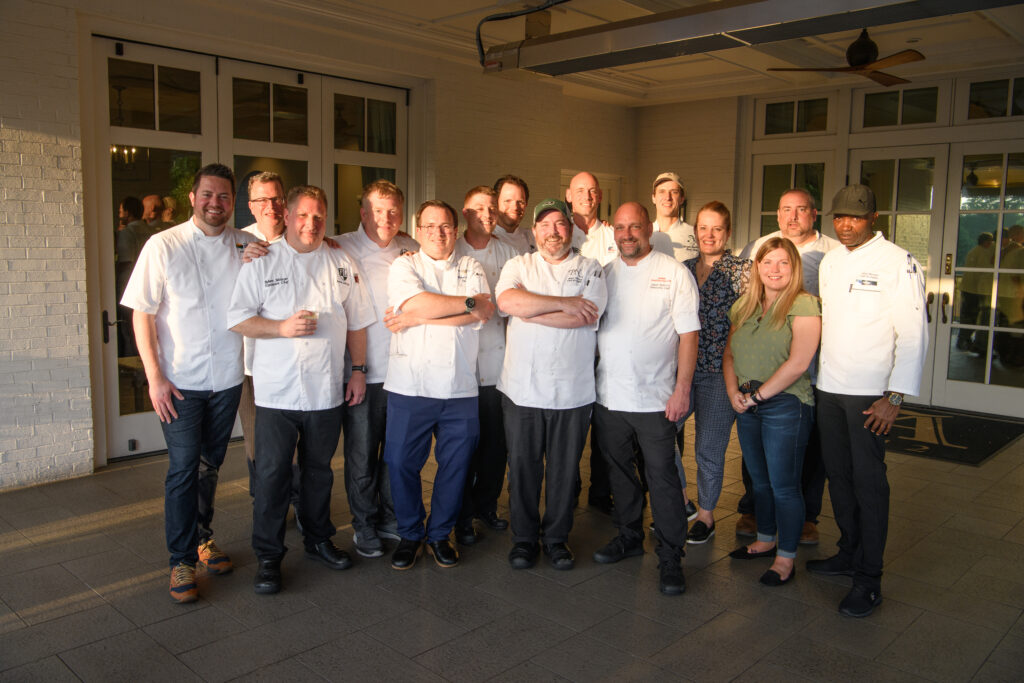 After the Chefs checked in to Atlanta’s Epicurian Hotel, a bus was waiting to take them to American Axes, where they—and their guests—could try their hand at axe-throwing while sipping on hyper-local beers and seltzers from Dr. Scofflaw’s brewery and tasting an array of foods for dinner, all from vendors at Chattahoochee Food Works next door.

The next day, at Ansley Gold Club, the chefs were welcomed by Kevin Walker, CMC, Executive Chef, Ansley GC, and one of the Chef to Chef conference coordinators.

First on the agenda for the day: Sabina Kindler, MLA Business Development Manager for Meat & Livestock Australia, and Chef Adam Moore spoke about the True Aussie story and the benefits of using Australian grass-fed beef and lamb products.

Sustainability is a huge focus for the brand and the industry as a whole. In fact, the Aussie red meat industry plans to be carbon neutral by 2030. And Australia is one of the only countries in the world to conduct a full-scale lifecycle analysis of the environmental impact of beef and lamb production from the farm to delivery in the U.S. Transport accounts for less than 5% of greenhouse gas emissions, water and land impacts.

Aussie beef and lamb products contain 13 essential nutrients, including iron, zinc, omega-3 and B vitamins. They’re also free of artificial additives and hormone growth promotants and boast a longer shelf life of up to 100 days. And because the animals graze on pure, natural grasslands throughout their lives, Aussie red meat is more lean and low in cholesterol compared to other animal proteins, while still remaining full of flavor.

Chefs had the opportunity to sample products, including beef and lamb meatballs. They discussed favorite and alternative ways to prepare beef and lamb, and they learned new ways to describe quintessential flavors. Instead of “gamey,” for example, words like “full flavored, earthy, complex and wild” might better communicate dishes and their flavor profiles to members.

After the presentations and learning sessions, the Chefs were put into teams of two to plan their dishes—featuring different cuts of Aussie beef and lamb—before heading out to Atlanta’s Buford Farmers Market equipped with a $50 gift certificate to purchase their ingredients.

Once the Chefs were back from the market, they started prepping and cooking. They had just a few hours to prepare multiple dishes that would impress Ansley’s members.

Check out photos of their dishes below (click to enlarge).

Reception from Ansley members was—as you can imagine—outstanding. Thanks to True Aussie Beef & Lamb for organizing this exciting (and tasty) event—and Ansley GC and Chef Walker and team for their hospitality. Start Your Wine Dinner With This Light and Flavorful Ajo Blanco