There’s no denying that wedding receptions look and feel different these days, complete with changed expectations, downsized events, a renewed focus on personalized details and, sometimes, hardly any seating at all. “If anything, members are concerned about shrinking their guest list,” says Michael Ponzio, Executive Chef of the Union League Club in Chicago. “Brides aren’t looking to serve cupcakes hanging from a flying trapeze in the middle of the room anymore. They’re just happy to be able to hold their events.”

Instead, Ponzio has found, brides and banquet managers are working harmoniously to “get family together.”

“No one is asking us to serve guests’ food with a rocket launcher,” he laughs. “It’s more like it was 40 years ago.”

“Micro weddings” are de rigueur, bringing with them intimate touches from the bride and groom, such as sustainable details, DIY beauty touches or individualized food displays. In some cases, live, concert-style music is taking the place of a DJ. As for favors, they’re customized (hello, monogrammed face masks).

For the reception, even if the days of elaborate, buffet-style spreads and over-the-top wedding antics are (at least temporarily) gone, it doesn’t
mean weddings are less engaging—
they’re simply being rethought.

“We haven’t been doing buffets or action stations, where things are cooked to order and lines get long,” says Kelly Franz, Executive Chef of the Kiawah Island Club’s River Course Clubhouse in Charleston, S.C. “Instead, we prepare everything in back and serve it from the station.”

Ponzio concurs, noting that many guests now want to avoid build-your-own experiences. “An attended buffet ensures everyone can be served, while offering everyone peace of mind,” he says.

Along with attended buffets, Franz has also noticed an emphasis on mingling. “It may still feel a little weird to sit next to someone you don’t know,” she says. “So brides are opting to have guests ‘pop’ around the room, talking and dancing.” Among guests who do favor a traditional approach, a popular choice is plated, three- to four-course meals with pod seating. “Some people feel more comfortable sitting in one spot versus congregating,” Franz notes.

But the three-option chicken, fish or steak menu selection? It’s not really a thing anymore.

“I recently did a vegan wedding for 240 people, at the request of the mother of the bride,” Franz reports.

To make sure that menu appealed to diverse palates, Franz used stand-ins like hearts of palm or jackfruit over meat substitutes, resulting in preparations like split-pea “ground beef” stippled with mushrooms and beets.

Ponzio has seen an uptick in vegan selections, too. Recently, he served dishes like portobello Wellington and plant-based tiramisu and “cheesecake.”

“We’re right on the water, so things do tend to be seafood-oriented,” notes Franz, adding that seasonality and local sourcing continue to drive menu selections. “But we never did sashimi, for example, before—and we did 1,000 pieces last Saturday!”

“Gatherings are more cultural than ever before,” Ponzio adds. “Authenticity is important, so I recently brought in a guest chef for a traditional Japanese event.”

The unique feel doesn’t only extend to settings, setups and food. Signature cocktails are also helping more weddings stand out from the pack.

“Bourbon and tequila cocktails are big right now,” Ponzio says, citing recent pours such as honey and ginger-inflected Lynchburg lemonade, made from single-barrel mash bourbon. “It’s no longer about martinis, champagne and rosé.”

At the Kiawah Island Beach Club, Franz says, that has translated to “gallons and gallons” of jalapeno margaritas; a sparkling gin blossom with elderflower; and a Marsh Mule made with Sweatman’s ginger beer, chai tea, vodka and orange bitters.

Really, if there’s one way to sum up the latest wedding trend, it’s that they’re now much more purposeful. “Great food and interesting selections—that’s what everyone wants,” Ponzio says.

That and togetherness, which has been fleeting and is therefore more cherished than ever. 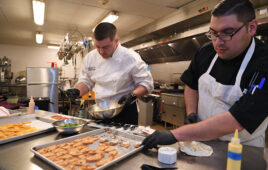