Trenton Country Club (TCC) in West Trenton, N.J., located just beyond the city limits of the state capital of Trenton, is steeped in time-honored tradition. The club was founded in 1897 and its leather-bound registry includes signatures collected throughout its history from such iconic American names as Astor (1901), Roosevelt (1901), Rockefeller (1911), and Crosby (1928), as well as from famous visitors such as Charlie Chaplin (1919).

Executive Chef Neil Mayoros, recently recognized in GolfStyles magazine as one of the Top Ten Club Chefs in America, has led TCC’s culinary program since 2010. While in the middle of another busy season, Chef Mayoros was kind enough to share his thoughts on how to run a top club kitchen, along with insights on the value that his broad experience with high-end restaurants and top catering operations has provided for his duties at Trenton CC.

C&RB: Chef, you‘ve said that your goal is for your menus to be “understandable” and for your food to be “identifiable.” Can you give us some examples of what you mean by this?

Mayoros: When considering a new menu for Trenton CC, I always include local and seasonal ingredients. The menu changes five times a year, with two versions of a summer menu.

The verbiage on the menu is easily translated, to ensure that the members know what they are ordering. I keep it simple and put all of the emphasis on seasoning and proper cooking methods—and then I also try to surprise them with the plate presentation.

C&RB: You have mentioned the “lost art of braising” in a conversation. Why do you think it’s a lost art, and what do you do at your club to try to change that?

Mayoros: I’ve always been fascinated with braising as a form of cooking, because it requires creativity and lots of love. Working with less desirable cuts of meat requires time and patience, and to me that’s the heart and soul of cooking. It’s the foundation to so many things we do as everyday chefs for sauces, soups, stocks—the list goes on and on. It’s so easy to open a can of base, or buy a braised short rib from your food purveyor. But we still make our own at Trenton CC.

C&RB: You don’t do a whole lot of plated, sit-down banquet meals at your club. What are some of the more popular station packages that you now offer?

Mayoros: More and more people are getting away from the traditional passed cocktail hour and sit-down dinner, and looking for creative stations. Some of the stations we’ve had at Trenton CC have included Taste of Thailand, Grilled Fromage, Sushi, Potato Bar, Tuscan Risotto, Mexican Taco, Kobe Slider and Crab Cake—just to name a few.

C&RB: Chef, your career path has included working for Restaurant Associates in New York and other various locations, as I did. I credit much of my success to what I learned with that company. What did you take away from your experience there that stays with you today?

Mayoros: For me, too, a great deal of my success has come from the time when I experienced “life in the big city” in New York. First and foremost, the chefs and cooks I worked with during that time were some of the best in the world. Also, the sheer numbers and volume of what we took on, as well as the diverse cultures we served and were exposed to, sculpted me into what I am today.

Parties for 1,000 people were an everyday occurrence during that time, with some exceeding 5,000! That certainly took some getting used to—but it taught me the value of commitment, organization, timing and execution. Those were all absolutely a must if you were going to “make it there,” as the song says! 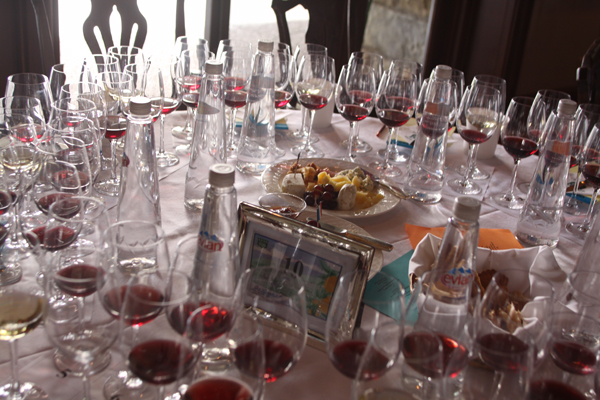 Trenton CC, located just beyond the city limits of New Jersey’s state capital, was founded in 1897.

C&RB: Previously in your career you also cooked, not once but twice, for André Soltner, the chef-owner of Lutèce, which for a long time was considered the best restaurant not only in New York, but the entire country. What was he like, and what did you cook for him?

Mayoros: The first time, while I was working as Executive Pastry Chef at TPC Jasna Polana, we had the privilege to host an event for André Soltner. This was no ordinary party—it was an opportunity to work side-by-side with him and prepare menu items from Lutèce. The menu (shown at left) was incredible!

Then, shortly after that one-of-a-kind experience with a Master Chef, I was working in New York at the United Nations, hosting a Chef’s Table. And as luck would have it, André Soltner was one of the guests dining that afternoon. What a privilege, and an honor, to have cooked for a chef of his caliber twice.

C&RB: Finally, Chef, even with all that you do at your club, you still find time to be the president of your local fly-fishing club. How does your involvement with that activity help you to execute your craft as a club chef?

Mayoros: As I’m sure most of those who are reading this are aware, the club restaurant business consumes a great deal of your life, so hobbies have to be an afterthought for most of us. But I do enjoy fly fishing as a source of relaxation and a way to ”charge the batteries.” One of my favorite places to fish is in central Pennsylvania on “the Little J”—the Little Juniata River in Spruce Creek, Pa.