Edgartown Yacht Club’s Executive Chef, Carolyn King, has streamlined operations and improved staff retention in the face of an array of challenges.

It’s rare to find a person who is strong enough, both technically and mentally, to lead an entire food-and-beverage operation at the tender age of 24. But for Edgartown (Mass.) Yacht Club (EYC), Carolyn King was the needle in the haystack.

“From the start, King’s work ethic set her apart,” says Club Manager Bill Roman, who has been with EYC for more than 25 years and is also a graduate of the Culinary Institute of America in Hyde Park, N.Y. “Promoting her to Executive Chef after only two years as our Sous Chef was a no-brainer.”

It’s now been twelve years since she was named EYC’s EC, and King’s promotion remains near the top of Roman’s list of his “best decisions” as Club Manager. “She can do the job of one-and-a-half people,” says Roman. “She’s steady, gifted and bold.”

Full-Speed Ahead
King’s passion and dedication continue to propel the club forward.

“Female chefs have an ambition that drives us to be better,” says King. “If I had to offer advice to female cooks, I would tell them to be fearless. And if you’re going to make a mistake, make it at full speed.”

King wasn’t always so composed. At the beginning of her career, she struggled with being taken seriously.

“I had a very hard time commanding respect and enforcing rules,” she says. “Not only was I young and female, but I also stutter. That has affected my relationship with members and colleagues.”

Even so, she distinguished herself among others early on.

“The biggest challenge any young manager faces is collecting, motivating and leading their staff,” says Roman. “And that’s where even I’m still learning. But the proof of King’s management savvy is in the satisfaction of the membership and the percent of annual returning staff.”

EYC’s menus have evolved to be more playful and whimsical.

Seasonally, King employs roughly 20 staff members. And each year, nearly all of those individuals return to work with her.

“This provides value all the way around,” says Roman. “We can hit the ground running.”

Lifelong Learner
EYC is only open from June through September. So King stays at the top of her game by wintering in kitchens across the world. Each season, she returns to the club refreshed and inspired.

“I’ve worked in Colorado, California and Vermont, among other places,” says King. “In 2011, I did a stage in Beaune, France at a two-Michelin Star restaurant. It was terrifying, but I had the unique opportunity to help prepare a seven-course Hospices de Beaune Wine Dinner for 700 people.”

Even more impressive, King doesn’t speak a lick of French.

This past winter, she worked as a pastry chef in Vermont to help round out her pastry skills.

“I’ve gotten much more playful with our food,” says King. “The stages and other continuing education experiences—like C&RB’s Chef to Chef Conference—help me bring back ideas, programs and skills to improve our operation.”

Plating and presentation are important parts of King’s process.

Mac Attack
Because the club’s kitchen used to be a bunkhouse for sailors, its layout more closely resembles a bowling alley than a professional kitchen. Each piece of equipment in the galley-style space serves multiple functions, from storage to prep to whatever else King and her team can dream up.

“The clubhouse is built on a wharf, so there is no place to expand,” King explains. “The key to getting the most out of the space we have is thinking through equipment purchases very carefully. Most of our stainless-steel work tables are custom pieces, designed to fit precisely in a specific location, and enhanced with features that maximize use and efficiency. The same can be said for beverage and dining-room equipment.”

(Storage and space is tight in EYC’s dining rooms, too, so the thought and consideration needed to outfit those spaces mirrors the process used for kitchen equipment.)

There is no room in the club’s kitchen for excess refrigerators, freezers or bulk storage. And to further complicate equipment purchases, the clubhouse can flood during hurricanes and abnormally high tides, so electrical wiring must come in through the top of all machines. Rust is also a big concern.

EYC’s oysters are from a farm in Katama Bay
and delivered four days a week.

“Fortunately, these challenges support our being a scratch kitchen,” says King. “I make fresh muffins for the tennis club when they have events, as well as croissants and scones. And, after a lot of trial and error during my stage this past winter at The Hermitage Club (Wilmington, Vt.), I can now make an almond macaroon that is perfection.”

The limited storage also forces the club to purchase locally whenever possible, so products can be delivered—and used—daily.

“There is no denying the local sourcing trend,” says King. “And with such rich resources available to us on the island, our members have come to expect things like local vegetables and oysters.”

A Menu Magician
Over the years, King has transformed EYC’s culinary profile, so much so that the club now turns a small annual F&B profit.

“Her menus grow more ambitious each year,” says Roman. “But she pulls it off while also developing incredible daily specials that sell out every night.”

EYC’s clubhouse is built on a wharf, so expansion is not an option. Even so, King and her team are skilled at navigating the galley-style kitchen to serve the club’s nearly 900 members an array of inventive and fresh fare, both for club events and a la carte.

Some of the club’s most popular dishes include the EYC Salad (made from Bibb lettuce, avocado, gorgonzola, orange segments, sunflower seeds, and a tangy champagne dijon dressing) as well as crab cakes and anything with swordfish or shellfish.

“Just last year, we purchased an immersion circulator, and we play around with some molecular chemicals,” says King. “Anything cured in-house or pickled is exciting. Seafood charcuterie is fun.”

“There is a fine line between being innovative and fun for younger members, and keeping it traditional for older members,” says King. “I am diligent about bridging these two parts of our membership.”

Street Traffic
To help boost walk-in business in the dining room, the club completed a $600,000 renovation in 2011 that expanded its bar seating from four seats that were rarely taken to a dozen that are now nearly always full. The interior finishes of the dining spaces were also updated.

“The old bar was very small and acted more as a service bar for the dining room than as a bar for members,” says King. “The new bar is significantly larger and affords members a commanding view of the harbor.”

Dinner covers, along with food-and-beverage revenues, saw an immediate boost after the bar was expanded—and continue to be strong today.

“Seats at the bar, particularly during dinner, are in high demand and have encouraged a greater number of walk-in diners than we ever saw before,” says King.

EYC also has an excellent wine program that draws in members. It includes an extensive list of member favorites, along with less-familiar varietals selected by EYC’s Beverage Manager, Deb Davis.

“We have a weekly wine special,” says King, who helps Davis educate servers prior to the start of the season.

“The staff is introduced to the wine list and is taught to recognize different varietals,” says King. “Our staff is usually quite young, so we reinforce different areas of the beverage program nightly before service.”

Davis also acts as the steward, to help the staff sell wines. “We’re a team, and we lean on each other and draw out one another’s strengths, to push our club forward and evolve to exceed member expectations,” says King.

Solid Solutions
Going forward, the F&B staff at EYC plans to continue its push to be more and better than anyone expects.

“I never thought much about labeling myself as a ‘female chef,’ ” says King. “I’m a chef. And I’ve worked incredibly hard to validate my place on the line.

“To succeed, I’ve had to be both gutsy and passionate,” she continues. “I care immensely that our food is good, that my staff is supported and that the general state of my kitchen is cared for. I’ve been fearless in making changes for the benefit of the club.”

EYC used to do a double-sided buffet during big events. But King hated making the members wait in line, so she did something she learned from Brooke Vorsika of the Four Seasons Boston.

“We put all hands on deck and did a double-plating line,” says King. “We were shoulder to shoulder, but it went twice as fast and the members got to sit and enjoy their friends, while being served an elegant, plated meal.”

She also created a hot app station last year that has since become an integral part of EYC’s kitchen.

“I noticed that my sauté guy was struggling to get the seared scallops and mussels out fast enough,” she says. “They were easy pickups to begin with, but they were definitely slowing the line down. So I moved the slicer, grabbed a portable stove and created a station. I worked that station on busy nights. This year, I’ve built the position into the staffing budget.”

Examples like these prove King’s adaptability and desire to please EYC’s members.

“Chef has been an instrumental part of moving the club forward,” says Roman. “She never stops thinking, planning or learning. She continues to grow and open new doors that lead down new paths. And everyone—her, me, the staff, the membership—benefits.” 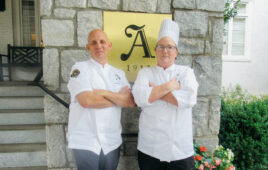