The new pastry chef of the Women’s Athletic Club in Chicago is serving up sweet endings for parties and events.

Pastry Chef Laura Herman spent the first ten months of her new position at the Women’s Athletic Club (WAC) in Chicago refining the pastry program and introducing her own style and recipes.

In doing so, she has looked beyond trends to focus more succinctly on what members want. She watches what they gravitate toward when creating pastry displays, and incorporates what she learns to make each dish, menu and event better than the one before.

When she arrived at the WAC after serving for six years as Pastry Chef of Conway Farms Golf Club (Lake Forest, Ill.), Herman was handed a WAC cookbook that features dozens of desserts spanning the club’s 120-year history.

“There is definitely beauty in tradition,” says Herman. She has found ways to update many of the members’ favorites so they retain their nostalgic flair and flavor, while featuring a more modern makeup.

One of the more surprising discoveries was that the lion’s share of the WAC membership requests gluten-free desserts. So for all banquets and events, gluten-free is now standard.

“There are plenty of desserts that don’t need flour to taste great,” says Herman, who shies away from recipes that demand substitutions, and instead chooses desserts that are naturally gluten-free. Most of the time, she says, members don’t even realize that’s the case with those items.

One of Herman’s most popular banquet desserts is a chai tea streusel with a chocolate cremeux. “You can change the flavor profile based on the season,” she explains. Panna cotta is an equally flexible (and gluten-free) favorite. “Panna cotta is also a great option to size up or down, if you want to do them as a plated dessert or as a mini,” says Herman.

When creating pastry buffets, Herman goes to great lengths to design them in such a way that each member will experience all that she and her pastry team have to offer.

“I never put two chocolates next to each other,” she says. “And I spread out the favorites. If you put all the favorites at the very beginning, the members won’t walk all the way through the display. We use lots of different elevations and we put the super-popular items toward the end”

Herman also likes to play with different vessels for party displays. “Three-tier stands are great for cookies and tarts,” she says. “They’re traditional, but still elegant, which is great for our club.

“We also try to have something on a stick, like a brownie bite or a Rice Krispie treat,” she adds. ”We also always have a rod of homemade doughnuts.”

Herman has introduced a donut-making action station that has been one of the hottest add-ons for kid-friendly events. “We live-fry the donuts, and the kids devour them,” she says.

Mini-donuts are also popular for late-night snacks served right at the end of a party, but nothing beats Herman’s homemade chocolate chip cookies. “Cookies are an especially great late-night option because if you have any extras, the guests or the members can take them home to enjoy the next day,” she says. 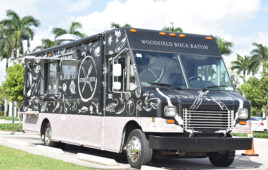 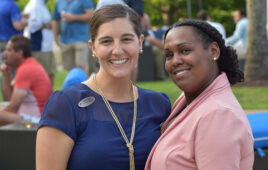