Green Spring Valley Hunt Club’s Thomas Hall and Crystal Spring Resort’s Aisling Stevens are using innovative action stations to erase the line between the back and front of the house.

In the center of the dining room, aromatic steam rises from a wok as the chef tosses a rainbow of vegetables into the air. Members look on in awe as they personalize their dishes in real time. With the rise of interactive dining across the industry, club and resort chefs are finding new ways to tempt their members’ senses with the use of action stations and tableside displays.

An action station invites the diner to learn more about the preparation, ingredients and inspiration behind the meal. Stations may range from build-your-own mac-and-cheese bars to ones where chefs construct colorful works of edible art.

This trend also brings the chef out of the kitchen and into the dining experience. Here’s how two chefs are finding unique ways to push the action-station boundaries.

Thomas Hall, Executive Chef of Green Spring Valley Hunt Club (Owing Mills, Md.), connects with his members by adapting and introducing some of today’s most innovative culinary ideas that he gathers from around the globe.

“I’m always trying to keep up with what’s going on in the culinary world beyond my club,” says Hall. “There’s inspiration everywhere. Every time I travel, dine out or see something new and interesting, my goal is to find a way to bring that idea back to my members.”

Last winter, the team at Green Spring Valley offered an interpretation of Chef Grant Achatz’s painted dessert from Alinea in Chicago. The presentation was nothing short of a culinary performance put on by Hall and his Sous Chef, Taylor Maxwell, who filled each group’s table with over 20 sweet ingredients as wide-eyed diners watched the developing work of art.

Personalizing and executing the meal required graceful planning. “After the main course was served, we told everyone at the dinner that we had a little surprise for dessert, and that we would need to relocate to another part of the clubhouse,” Hall relates.

As diners at each table completed their entrees, they were whisked into a separate room that had been arranged for the show.

“We decided to work with chocolate and coffee as the base flavors and build off of those,” says Hall.

Each guest received an individual mocha mousse topped with chocolate hazelnut biscotti and mascarpone cream. The chefs then swirled vibrant ingredients in the center of the table, including lemon curd, coffee crème anglaise, and both a salted caramel and chocolate sauce.

They then added texture, with homemade cinnamon toast crunch, biscotti crumb, and candied lemon peel. The final touch was a “chocolate bomb,” cracked open to reveal a profusion of treats including malted milk balls, pralines, edible flowers, and chocolate croquants.

Interaction with Green Spring Valley’s close-knit group of members is at the heart of Hall’s cooking style, and that was especially the case with this dessert course.

“Outside of the club, most people don’t get to meet who actually cooks their food,” he says. “Our cooks love to step out of the kitchen and do something new, to make the member’s dining experience special.”

Other action stations at Green Spring Valley draw members into the culinary experience through other senses, such as smell. “You know how the smell of boardwalk fries or funnel cake can immediately transport you to the beach?” asks Hall. “That’s my goal with our action stations. I want to take my members someplace unexpected and build a connection through food.” Tucked in the valley of a North Jersey ski town, Aisling Stevens, Executive Chef of Crystal Springs Resort, expertly manages a collection of distinct dining experiences. No matter the restaurant’s style, her use of action stations and displays taps into each guest’s culinary creativity.

“An interactive food station allows our guests to customize their fare to fit their preferences,” she says. “This not only makes the guest feel special, but it sets a sort of guarantee that they will love the food they are eating, because they built it.”

Whether served at a wedding or in Crystal Springs’ al fresco Chef’s Garden, each station and food display includes an element of playfulness. At the stir-fry wok station, for example, diners build their Chinese food box of lo mein, fried rice, tempura or stir fry with proteins of their choice.

Stevens features similar personalization options at stations themed around pasta, sliders, pretzels and hot chocolate. Diners can even head up to the donut wall, choose their donut of choice, and add icing and toppings to complete their creation.

The Roaming Food Bar is one of the most recent additions to Crystal Springs’ wedding cocktail menu. Caviar bars, Mexican food stations and raw seafood displays make their way around the room in custom transport boxes as wedding guests sip cocktails and mingle.

With several different restaurants at Crystal Springs, Stevens faces a unique challenge when adapting her menus for each unique outlet. Action stations at Crystal Spring Resort include elements of playfulness to help draw in the guest while also making the meal more memorable.

“For example, our Crystal Tavern has a ‘local/neighborhood’ type feel, so I encourage my head chef to bring a dish out or walk the floor, to get to know the guests,” she says. “It not only makes them feel great, but it makes everyone in the room feel like they’re being looked after.”

At the resort’s Chef’s Garden restaurant, which is only open in the warmer months, guests watch chefs roast lamb legs or whole pigs on an open fire. Surrounded by panoramic views of the mountains, diners lounge in a patch of edible greenery.

“Guests are sitting within our chef’s garden, so they may spot one of the cooks snipping from salad leaves or fresh herbs at their feet, and find it on their plate minutes later,” she says. Getting in on the Action 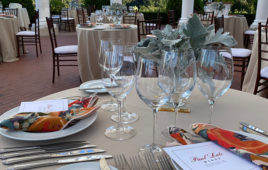