When the Union Club of Cleveland began its search for a new Executive Chef in 2017, General Manager Lawrence McFadden, CMC, wondered if a Michelin-starred chef and the club’s 65-year-old palate could co-exist. Turns out, they can.

One of the biggest challenges facing clubs today is knowing how far to push the envelope when it comes to cuisine. As we all know, fried fish is the top-selling item year-in and year-out. This fact leads to a behind-the-scenes debate about how club culinary talent can add value when preferences are so far ingrained in tradition.

Some general managers won’t even risk upsetting the membership by messing with the menu. The only time they’ll address the menus is under grumbles of culinary dissatisfaction by the mass membership. But circumstances do bring change to the kitchen. And it’s important to understand that the implications of a new chef can go far beyond just selecting the right talent.

Steve Jobs once boldly stated, “It’s really hard to design products by focus groups. A lot of times, people don’t know what they want until you show it to them.” I love that quote, as it perfectly describes how we recruited and introduced our Executive Chef, Arnaud Berthelier, CMC, in September of 2017. (Read more: The Master Chefs of Cleveland’s Union Club) A club’s culture is often defined by its “norms,” whether based on tradition, gender, palate, regional ingredients, or, as is the case in our fine club, age. Before even writing his first new menu, creating specials, or executing an event, we knew that we needed to identify our cultural norms and work to honor them as we integrated Chef’s ideas and talent.

The lesson? Classic, traditional dishes should be celebrated not shunned.

In celebrating tradition, we are better able to fostered trust with our members. That trust has allowed for creativity to bloom in various forms and enclaves throughout our club. Most world-class chefs understand that without trust, any menu changes are doomed to be unsuccessful in the member’s eyes.

Patience is indeed the key to fruitful exploration.

Our next step once we identified our traditions was to create a culinary storyboard. This collection of culinary scenes would play out over Chef’s first year with us. While leaving most events and menus untouched, we began to create new and enhance other events at which creativity and uniqueness of experience would have a big impact. That meant bringing in celebrity chefs, creating a community chef’s table, and introducing ingredient-themed events. Now, creativity shines alongside tradition.

In our annual events calendar, published in our magazine, we further this by describing events with terms like traditional, world-class, guest chef, celebrity chef, and cutting edge. These terms inform members of what they can expect at each event. Once released, members are consistently content in the knowledge that we understand and respect the club’s tradition. Thankfully, many members are also excited about the opportunity to experience new and exciting culinary offerings and events.

Creating trust first and foremost ensured that our members view our Executive Chef as an asset and not a liability of change. And by thoughtfully approaching our story, we are simultaneously celebrating our past while embracing our future. 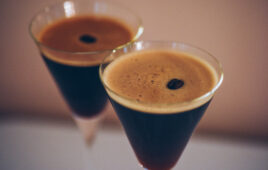 The Espresso Martini Is Everywhere (Again)