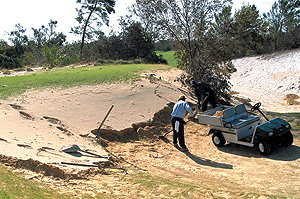 A baptism under the fire of Gordon Ramsay of “Hell’s Kitchen” fame helped to prepare Andi Van Willigan for the Executive Chef role at Los Angeles’ renowned Bel-Air Country Club.

As the bar continues to be raised on the level of cuisine in the club industry, we are seeing an influx of culinary talent come to our properties from all over the food business. This month’s “Chef to Chef” profile is a clear example of that.
Andrea (Andi) Van Willigan has spent the first decade of her young career working as the right hand to two of the most high-profile chefs in the world. She has worked in a corporate role, developing new restaurant properties, as well as in television production.

And the hard work has paid off. Both Gordon Ramsay (of “Hell’s Kitchen” fame) and restaurateur Michael Mina saw what a dynamic chef and driving force she can be. Right out of culinary school, Chef Andi showed how a great work ethic can open up many opportunities in the food business.

Now she is running the kitchen at the very exclusive Bel-Air Country Club in Los Angeles. And as you’ll read, she is wasting no time putting her mark on a dining program for which there have always been extremely high expectations.

C&RB: Chef, you worked as Gordon Ramsay’s Corporate Executive Chef for the U.S. for eight-and-a-half years in various roles. What are some of the most valuable experiences that you took away from that role?

Van Willigan: We had so much going on at one time while I was with the Gordon Ramsay Group. We would be filming for a television show one day, opening a restaurant in Hong Kong the next, and then appearing on “Jimmy Kimmel Live!” the following day. I learned to wear many hats, to multi-task, and to be dynamic. I really enjoyed working on “Kitchen Nightmares” and “Hell’s Kitchen,” and the most valuable experience I took away from being in the group was teaching and mentoring. Our team was pushed to reopen restaurants, train staff, and mentor chefs to win.

Bel-Air CC’s dining venues and renowned golf course, designed by George C. Thomas, Jr. and William P. Bell, offer views of the L.A. skyline as well as a respite from the city’s activity. The club was founded in 1925.

C&RB: What kind of person is the real Gordon Ramsay?

Van Willigan: He’s an extremely hard worker and very dynamic, family-focused and loyal. He made everyone feel special and appreciated, always remembering everyone’s name. He knew how hard the crew worked, and rewarded us for it.

C&RB: You have the perfect skill set for a club chef, having opened public restaurants and also turned out plated meals for more than 1,000 people. How have all of these experiences helped you so far at Bel-Air?

Van Willigan: My previous jobs have definitely prepared me for the country-club world. At Bel-Air, we run three different dining rooms, banquets, weddings, canapés, etc. On top of many banquets or wine dinners, Bel-Air runs 32 different services a week. It helps with practice—I’ve really learned how to get organized and plan everything, from costing, plating, execution and delivery. Relaunching a new menu or concept, or hosting a 40-person banquet, needs to be thought out and planned. I’m very fortunate to have a great team at Bel-Air to help with this process.

I treated coming to Bel-Air as a new restaurant opening. I assessed what needed the most attention first. I downsized the menu, implemented a recipe book, started an organic garden, and changed purveyors to more local, farm-driven vendors. We started to make everything in-house, from smoking our own meats and making all of our own pastries.
In every type of business, you have pros and cons. Comparing restaurants to country clubs has many similarities, yet differences. I enjoy having a supportive audience, having the capital to implement projects like an organic garden, and having a budget for education. You don’t find that in a stand-alone restaurant.

C&RB: Were you surprised coming from public restaurants, where it’s 100% innovation 24/7, to the club industry, where some signature dishes are so cherished?

Van Willigan: From my experience in opening so many different concepts in various areas, I knew I had to understand my customer base. I had a good idea of what dishes I would be able to change or recreate, and what dishes would be more sensitive. You can be the most innovative chef, but that doesn’t mean you’ll always be successful. At the end of the day, you need to give people what they want.

C&RB: How are you winning over your culinary team to help you get the Bel–Air food program to where you’d like it to be going forward?

Van Willigan: I won them over by leading by example. I proved to them I could “run the mile” with them. I was very hands-on with the team and we did multiple tastings and recipe developments together. I made sure the team was very involved with any changes that were made.

C&RB: Speaking of education, you heard about the Chef to Chef Conference at the 11th hour and came down to attend in San Diego. What stood out most about that event?

Van Willigan: I’ll admit I was very naive to the country-club world. I definitely did my research through the hiring process at Bel-Air, but coming to the Chef to Chef event really opened my eyes. I found the presentations to be refreshing and educational, but most of all I really enjoyed networking and building a community that I can reach out to and learn from. I’ve already kept in contact with a handful of chefs—we share menus, recipes and consult with each other on common issues.