How to bring the front and back together to ensure a great member dining experience.

There are many moving parts within a club’s food-and-beverage operation. From chefs and line cooks to servers and dining room managers, everyone should be working toward the same goal: to offer an outstanding member dining experience.

But mistakes are made, tempers flare, blame gets passed around and arguments ensue. How these issues are handled—or, ideally, avoided—can make or break a club’s dining operation.

“The first step to improving the relationship between the front and back of house is finding the problem areas, validating them and drawing up a plan to fix them,” says Richard Beckel, Executive Chef of Woodholme Country Club (Pikesville, Md.). “Then, as Chef, you must stay vigilant.”

Beckel, who has been with Woodholme CC for one year, was brought in as an agent of change for the club’s nearly $2 million F&B operation. He has spent the past year improving the dynamic between the front and back while creating a new culinary culture.

“Chefs must come out of the kitchen to see what’s happening on the floor,” he says. “It’s critical to experience what your servers are seeing and experiencing. You’ll also gain a lot more respect and forgiveness from members by opening a dialogue with them when a mistake is made as result of a team breakdown.”

Beckel recommends addressing the issue with the member first, and then reviewing the mistake with the team. His formula is as follows:

“Any problem, whether the kitchen overcooked the burger or the server rang in the order wrong, is a team problem and requires a team solution,” says Beckel. “Realistically, chefs don’t cook hamburgers to the desired temperature on the ticket, then shove it in the fridge before handing it off to the server to deliver it to the table. And servers don’t intentionally enter the wrong order in the middle of a busy service, just to screw things up on the line.”

Putting yourself into the situation, to see where the rough spots are, will allow you to work on fixing them, Beckel explains.

“Sometimes a solution is simple, like buying a pump system for servers who keep forgetting to bring ketchup when fries are ordered,” he says. “Other times, solutions take training— if there are consistent issues with doneness on steaks or burgers, for example, perhaps the team needs to review what we consider rare, medium and well.”

Communication is the root of success. 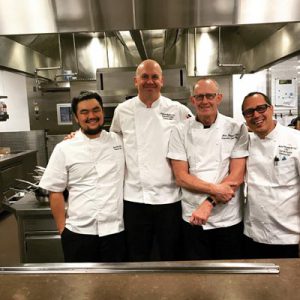 Executive Chef William Rogers of the Cosmos Club (right, second from left) says it’s easy to be loyal to chefs, but it’s critical to listen and be aware of all issues on both sides of the house.

Since William Rogers came to the Cosmos Club (Washington, D.C.) to take on the role of Executive Chef nearly three years ago, he has made substantial strides in food quality. He and Carolyn Papetti, Food and Beverage Director, have also vastly improved service standards as well as the team dynamic.

“As Executive Chef, it’s easy to be loyal just to the chefs,” says Rogers. “But you have to listen and be aware of all the issues, especially the ones in the front of the house. They are seeing what we can’t from the kitchen. I try to set the best example I can, so that my cooks can follow suit.”

The Cosmos Club does $6.8 million in annual F&B with more than 2,800 members. It’s an upscale city club focused primarily on dining, with a staff of about 125 people.

“[Papetti] and I have an open-door policy with one another,” continues Rogers. “We work toward the same mission and try to lead our team in that direction. I encourage her to share with me if a member of my team is out of line, and vice versa. Then we coach and counsel appropriately.”

The relationship between Papetti and Rogers is pivotal to Cosmos’ success, and all policy changes and training starts with them. The two managers do not take this responsibility lightly, as they realize the impact they can have on the club’s F&B success.

“We wanted to abandon tray service,” says Rogers. “But we couldn’t just command and demand that servers stop using trays, especially if we wanted to get positive buy-in from them.

“Instead, we set up a training game where servers had to serve 100 covers with a tray, and then again without them,” he continues. “We timed them and were able to show them how much faster they are without trays.”

The same exercise was also done to show the benefits of serving banquets live, instead of with pre-plating.

“We want the team to be invested in what we do and why,” says Rogers. “If we’re fighting, we’re not focused on food or service. It’s like standing with a hose while your house burns down.

“Improving the team dynamic has to come from cohesive leadership and strong training,” he adds. “We must also lead by example and be there every step of the way.”

When Scott Doran was promoted to Executive Chef at Menlo Country Club (Woodside, Calif.) nearly a year ago, he had unique insight into the F&B team dynamic. Prior to his current appointment, he had worked as Executive Sous Chef for two years and as a line cook for one year before that. “It’s important for me to give the team the tools they need to succeed,” Doran says. “Each person deserves respect and the opportunity to learn and grow, just as I did. As Chef, my job is to help them become better, so they can continually improve the member experience.”

Doran maintains his professionalism when a problem arises. For example, when a new server rang in the wrong order in the middle of a busy service a few weeks ago, he took the new hire to the side to explain the impact of the mistake.

“The fact is, I didn’t give him the knowledge or tools to succeed,” says Doran. “His mistake wasn’t malicious. And degrading him or screaming at him in front of the whole team wouldn’t serve the mission of the club. It doesn’t build confidence in the team, and it doesn’t make me a better leader.”

Instead, Doran took the time to train the new hire and explain the domino effect between both sides of the house. Since then, he reports, that server has been careful to double-check orders so mistakes aren’t made.

“When you respect your staff, and give them the tools to do their jobs, they will respect you,” Doran says.

In April, when Scott Craig returned to Myers Park Country Club, Charlotte, N.C., after serving as Executive Chef of Chevy Chase (Md.) Club for three-and-a-half years, he brought with him a new perspective about how best to manage the BOH/FOH dynamic. Scott Craig, Director of Culinary Operations at Myers Park Country Club, Charlotte, N.C., offers seasonal menu training for both front and back of house staff at each change.

“I had the opportunity to work with one of the industry’s best food-and-beverage directors at Chevy,” says Craig. “And I saw what it meant to be a truly unified team.”

Training is critical to achieving that unification, Craig learned. So both sides of the house are now present at all Myers Park menu releases, and the barrier between the two sides has all but vanished as a result.

“A server should never be too intimidated to ask a question of the culinary team,” says Craig, who also began creating spec sheets for new dishes to give servers a brief overview of them, noting any potential allergens.

Craig also created a new position at Myers Park to help with the team dynamic.

Meredith McKenzie, Food & Beverage Administrator, is now the club’s liaison between both sides of the house. She is tasked with marketing, social media, photography, reservations and more.

“All those ‘nice to have’ ideas we come up with as chefs get put on Meredith’s desk, and she powers through to make them happen,” Craig explains. “We are a more unified team because of her work, and we’re moving toward one goal more efficiently, which leads to a better member experience.”