As impressive as the facility is, even more impressive is the pantheon of chefs who have helmed its food-and-beverage operation. The latest to take up the mantle at DAC is Shawn Loving, CMC, who has been named to succeed longtime Executive Chef Kevin Brennan after his retirement.

Loving’s culinary education began at the school for which he ultimately became the department chair, Schoolcraft College in Livonia, Mich. His career took him through hotels, clubs, the Disney organization and Las Vegas before he opened his own restaurant, which he operated for seven years.

Loving went on to cook for professional athletes in progressively larger roles, eventually serving as the Executive Chef for the U.S. Men’s and Women’s Olympic Basketball Teams for the Beijing, London and Rio Olympics, as well as at the FIBA World Championships in Turkey and Spain.

As an indication of Loving’s reputation among professional athletes, when the NBA’s efforts to feed the professional players in the COVID-era “bubble” were less than stellar, Loving was called in to make the necessary adjustments.

SC: What inspired you to join our craft?
SL: I made split pea soup with smoked ham hock in vocational school. It was a done deal!

SC: Please describe your philosophy on running a kitchen. What are the sacred rules?
SL: My philosophy has always been rooted in “togetherness.” I have humbly learned that I am nothing without my team and there is no top-down mentality. My stewards will always be as much of a priority as my Chef de Partie. Every member of my staff deserves connection.

I also believe in no side-barring or hiding communication from one another. Doing so can only negatively impact service standards. It does not honor culinary excellence, and our mission here at DAC is greater than any single compliment.

SC: What does work-life balance look like for you?
SL: This is a tough one. Balance is hard. I try to concentrate on making sure I’m very mentally present for those big lifetime moments. I see this mentality as my new balance.

SC: What was it like working in the NBA bubble?
SL:  It was unlike any experience I have ever had. In the Olympics, I was tasked with bringing my program and cooking standards into a fine hotel and working through the difficulties of not being really wanted there by that hotel. The NBA bubble was meant to please athletes at the highest level, but without any interaction with the staff. This was especially difficult because, as chefs, we are used to hearing praise for good and adjusting for the off moments.

It was a great lesson in learning to trust your cooking, flavors, and touch. This helps to develop self-confidence and it leaves your ego in the parking lot—which is awesome.

SC: Given the impressive list of accomplishments you have achieved so far, is there one that stands out as most memorable or one you are most proud of?
SL: I am proudest of the self-reflection I did in 2010 after I first took the CMC exam. I looked in the mirror and realized I needed to work on my craft more and truly live it. That failure is a memory I will never forget.

Why is that a proud moment for me?  Because I am a better cook now, which also made me become a stronger leader, and that is what the culinary industry needs most.

SC: What legacy do you hope to leave behind?
SL: I hope to be remembered for never settling and not being afraid to reach for my goals and my dreams.

SC: If you could go back in time and give a 21-year-old Shawn Loving one message, what would it be?
SL: I would say, “Take the time to watch your mother more closely when she makes smothered meatballs with small onions.”

I was too busy thinking of moving on, but it was something about that sauce that I would want to show all the young cooks. It was perfect (even if they would likely say that it’s “dated”).

SC: If you could change one thing about our industry, what would it be?
SL: Stop disrespecting the foundation of cooking. Our craft’s forefathers were unbelievable. Learn about them. Do not dismiss them simply as “old school.” Trust me, there are some valuable pearls down there. 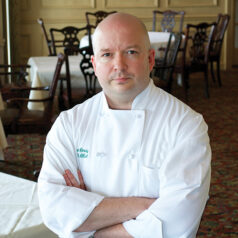 Craig attended Virginia Tech University before beginning his career in private clubs as a Restaurant Chef at Baltimore (Md.) Country Club and the Chevy Chase Club. He also continued his education at the Culinary Institute of America and at Johnson & Wales University.

Craig’s culinary development began during his early years in rural Southern Virginia, working in his family’s gardens and cooking alongside his great-grandmother. His philosophy on food is informed by the lessons learned during those early years: Cook seasonally, source locally and give graciously.

Craig is an American Culinary Federation (ACF) Certified Executive Chef, Certified Culinary Administrator, an ACF competition judge, an ACF Lead Certification Evaluator, and is a member of the ACF National Scholarship Subcommittee. He has competed frequently in ACF competitions, garnering gold medals in hot food, cold food and mystery baskets. He has been approved to judge international competitions by the World Association of Chefs’ Societies.