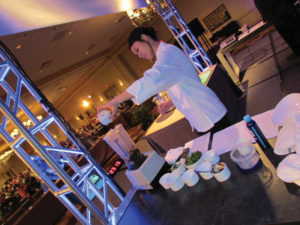 In the Academy Award-winning film about his fictional life, “Forrest Gump” had an uncanny knack for meeting important people and being a part of some of history’s biggest events. So it was only fitting that the “life is a box of chocolates” philosopher was part of the excitement when C&RB’s Chef to Chef Conference came to Gump’s adopted hometown, Savannah, Ga., from March 1-3, 2015, for the most well-attended gathering of club and resort chefs and managers in the Conference’s seven-year history. Some of those who arrived early enough for the Conference took advantage of the opportunity to play golf at the Westin Savannah Harbor resort. A group of about 40 also attended a special class on “culinary medicine” that concluded with a full-course lunch featuring suggestions for more healthful appetizer, main course and dessert alternatives (for details on the class and the menu, see the Chef to Chef Conference Update report in the April 2015 issue of C&RB’s Chef to Chef quarterly supplement).

The Conference then got into full swing with an opening reception that included the opportunity for Conference attendees to meet and pose with Forrest Gump.

After a sit-down dinner, the Conference keynote address, “Building Our Brand by Driving Excellence,” was delivered by Jim James, CCM, Senior Director, Club and Hospitality Operations, Augusta (Ga.) National Golf Club. James’ remarks inspired and challenged the chefs and managers in attendance to establish or strengthen their own “brands” at their properties. “Members will brand you based on the experience they receive,” said James, who described how brands are created through the “three Ps”—(a sense of) Place, People and Process. “What’s your pimento cheese sandwich?” James asked the Conference attendees, referring to the signature  menu item associated with Augusta National and the Masters tournament. A key to establishing distinctive brands, he added, is properly communicating missions and strategic objectives in terms that  everyone in the operation can easily grasp. “If your people don’t understand where you’re going,” James said, “you’re not going to get there.”

James left his Conference audience with this message: “The major challenge in taking care of members and guests is to realize that you never become so good at it that you can quit working on it.” Mueller was followed by a local club chef, Matthew Roher, Senior Executive Chef of The Landings Club in Savannah, who demonstrated other locally inspired dishes while outlining the staffing and teambuilding philosophies used at a property that encompasses  six golf courses, five distinct restaurants and other food-and-beverage outlets, and a total of 70 culinary professionals.

Roher also touched on how the sous vide cooking process could be used to help with large-scale preparation and distribution of products when catering operations are spread throughout a property as large as The Landings.

After the first of many breaks when Conference attendees could visit a variety of sponsor tables to view new products and services, Olivier Andreini, CMC, Executive Chef of the Country Club of Landfall, Wilmington, N.C., then devoted the next session entirely to how the sous vide process—a topic that previous years’ Conference attendees have indicated is of strong interest—can be used to enhance productivity and food safety in a la carte operations.

“You shouldn’t sous vide just to sous vide,” Andreini said, who provided practical tips for cataloguing time-and-temperature recipes for dishes that are well-suited for the process. “You should use it when it can help your operation.” 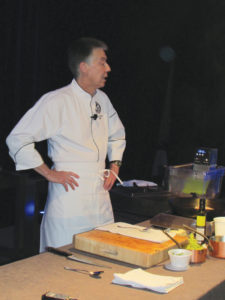 In the next session, Joey Abitabilo, Executive Chef, Shelter Harbor Golf Club, Charlestown, R.I., demonstrated simple but effective in-house baking techniques for breads and other products (including rolls, biscuits and ciabatta). Reaction from Conference attendees showed great appreciation for the valuable lessons conveyed through Abitabilo’s demonstration, which included simple but effective tips such as how to “create” a “fancy” steamer (“throw a fistful of ice on the oven floor”). “It got me thinking of doing a bread program,” said one attendee’s evaluation of the session. “It helped show me the ease of fresh product and saving money,” added another.

The Conference then shifted gears for sessions devoted to motivational topics—both for the culinary staffs that are under the charge of the attending chefs, and for those chefs and their own careers. Jon Maley, Executive Chef of The University of Washington Club in Seattle, imparted his philosophies on managing a culinary team as part of a presentation on training, which he stressed is an ongoing process that should revolve around continually asking questions such as “What do you need to get through service?” and “What do you want to do next week?” In response to one question from the audience that asked, “How do you motivate a slow-moving, one-speed cook?” Maley replied, “Give him more to do.” That characterized a session that  one attendee summarized as “true and practical [and that showed how] straightforward and honest praise—and criticism—of staff goes a long way.”

Key messages delivered by the GMs’ presentations and through the audience Q&A included the need for chefs to broaden their knowledge of the club business, even if they don’t aspire to advance into general management, and to also develop skills beyond those that serve them well in the kitchen—in particular, for public speaking. “When you’re a chef, you’re used to being in control of what you’re doing,” said Dorman. “When you’re in a suit [as a manager], you have to learn what it’s like to not really be in control of anything and to be at the mercy of everyone. But learning to look at things through others’ eyes is healthy; it helps you grow.”

Developing a higher public profile and making effective presentations in both small and large settings has become especially critical for chefs, the managers stressed, as clubs position their food programs as key components of a membership’s value.  “The easiest person to replace is an executive chef who doesn’t go to the dining room,” Redmond said.

The Conference’s first day then concluded with an outdoor reception in ideal weather, where attendees could watch the always-popular Mystery Basket competition, followed by an open night to explore Savannah’s diverse and acclaimed culinary scene. The Conference then resumed the next morning with a lively session presented by Daniel Palsi and Jennifer Monaco, who described the innovative and successful wild-game program they instituted at Manasquan River Golf Club in Brielle, N.J. In addition to bringing distinction to the club’s menus, the presenters noted, the program also energized the staff, with members of the team eagerly transitioning, Monaco reported, from “Ew, there’s an animal on the back table” to “What did they get this time?”

The next session featured a perennial Conference favorite, Vincent Horville, Executive Chef, The Metropolitan Club of the City of Washington (D.C.), who once again demonstrated innovative dishes and techniques, this time to help bring distinction to buffet displays. Just as individual plates are  the “paintings” for a la carte service, Horville counseled, buffet tables should be seen as “plates” that must attract diners’ attention as soon as they come into a room. In both cases, he added, “less is more” and the emphasis should be on having fewer but more striking display elements, rather than an overload.

Penelope Wong, Executive Chef, Glenmoor Country Club, Cherry Hills Village, Colo., then captured the Conference crowd with a compelling presentation and demonstration of how she has revamped her club’s menus by drawing on her experience with a family restaurant to feature “unpretentious, simple and satisfying” food such as khao man gai (Thai chicken and rice).

“For foodies, street food is synonymous with authenticity,” Wong noted—and her success in introducing dishes drawn from those origins, she added, has proved that it’s “not an oxymoron” to include them in club settings.

Another highly acclaimed Conference presentation was then made by Tom Siders, Executive Chef, Hopkinton (Mass.) Country Club, who described the comprehensive approach his club has taken to simultaneously introduce healthier kids menu options while also implementing a highly successful kids camp program that emphasizes nutrition along with the development of basic kitchen and cooking skills. “It was awesome to see a chef put the same kind of effort into kids food as many put into formal menus,” said one Conference attendee in praising the value of the session.

In the Conference’s final presentation, Andrew Kneessy, Executive Chef, The Kansas City Country Club, provided a step-by-step history of the planning and implementation of his club’s highly successful Pool Cafe satellite food operation. In addition to establishing the cafe as a distinctly successful dining experience, Kneessy also highlighted the value of the satellite operation as a valuable training ground for both culinary and front-of-house staff. And for a group of about 40 attendees who were able to stay beyond the official end of the Conference, their Savannah experience was further extended thanks to the generosity of The Landings Club, which hosted a reception and dinner after the Conference’s final day.

Inside the 2022 Chef to Chef Conference in Nashville