For Gerald Ford, CMC, Executive Chef of The Ford Plantation and Captain of Team USA, the IKA/Culinary Olympics 2020 represent countless hours of practice, but also tremendous personal and professional growth. My journey on Team USA began on April 2017, when I first submitted my application to be a member. Now, 30 months later we are looking at less than 30 days until we compete in Stuttgart Germany at the I.K.A. also known as the International Culinary Olympics.

When first considered joining the Olympic Team most of the advisers I turned to from past teams we’re very clear about how making the team was not nearly as hard as staying on the team and keeping up with the work and complicated demands of my time that would come as a result. In fact, that was the most consistent message relayed to me in the beginning. The amount of work that would need to be done in order for us to be successful in the competition would grow and the strain it would put on my professional, personal, family and work life was something that I nearly impossible to prepare for.

On the flip-side, I did not yet know the great joy there would be in getting together as a team, bonding and growing and starting to make real progress, banding together like a group of brothers and sisters. I didn’t yet know the depth at which we would learn food in our program and how it would be beyond anything we ever could have considered.

I was told that a year on the team is equivalent to five or 10 years in the industry. I couldn’t agree more.

What I can say with certainty is that I have seen tremendous grown in myself over these past few years. I have seen improvements in my culinary program, management skill and in my ability to work with others. It’s impossible to quantify all the benefits and growth I’ve seen a result of my time on Team USA, but I can say, with absolute certainty, is that by being able to interact with the group of advisors and teammates, and tap into their level of expertise, it has changed everything about who I am, the way I think and what I do. It’s like when your circle of friends is a group of high achievers, you can’t be anything but a high achiever yourself, assuming you’re paying attention and doing what they’re asking of you. The growth comes with consistent work and practice. It’s simple mathematics. We’ve been working as a team for 30 months. That equates to 30 complete practices as team or 120 weeks of work. I think the results start to reveal themselves when you start to look at how each of our practices have evolved from shorter sprints into full-on marathons.

In the beginning, it was quite difficult to do two or three hours of work during a practice for a competition that felt so far away. It was fun and exciting to start, but it became very daunting during that long, hard, middle where we were not necessarily seeing huge results, but still needed to work.

Now, here we are, just a few weeks from Germany and all of a sudden I find myself wanting to spend 10 hours a day trying to make the program as perfect as I can, not only for me but for the teammates who share the floor with me and for the management who has invested so much in us.

Now is our opportunity to drive home all the work we’ve already put in. We’ve reached a point where the push for the last two and a half years has transitioned into a pull and I find it impossible to focus on anything else. 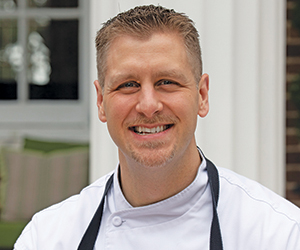 Gerald Ford, CMC, is currently the Founder and Culinary Director of Legit Culinary Concepts, an organization that aims to improve the quality of life for chefs and culinarians around the world by providing tools and systems tested and developed with the experience of a master craftsman.

In 2017, Ford achieved the Certified Master Chef designation. He is also the Captain of the ACF National Culinary Olympic Team USA, a position earned in 2017.